The Voltage Painter contributed to the art program at Gogbot festival in Enschede (NL) with an installation called SEISMIC. The acronym stands for Superposition & Entanglement of Image & Sound, Making an Interactive Choir.

It was a self-playing, interactive work on the modular audio and video synthesizer. The festival theme is Quantum Supremacy and Gijs was inspired by two phenomena that play a role in quantum computing: superposition and entanglement. Music and video continuously influence each other and are strongly affected by the visitor stepping into the camera’s field of view. The unpredictable outcome symbolizes humanity’s challenge to keep a grip on almost unimaginable technological developments.

SEISMIC consisted of a modular audio and video synthesizer, a sound installation with speakers, a camera, and a projector. The synthesizer played a generative patch, meaning that it played and evolved without the artist’s intervention.

The festival, and Gijs’ participation, was a big success. People were very engaged with SEISMIC and it left big smiles on their faces. Because the modular synthesizer has no save function, the work no longer exists. 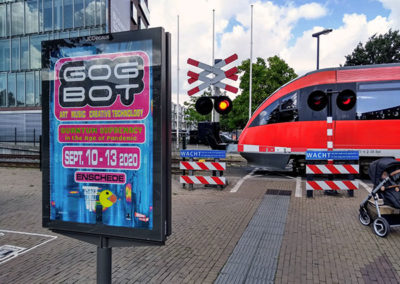 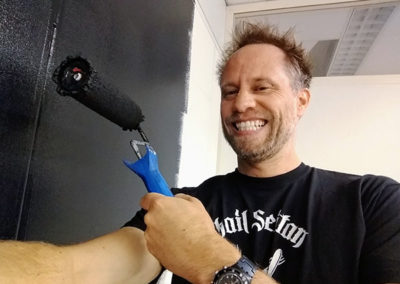 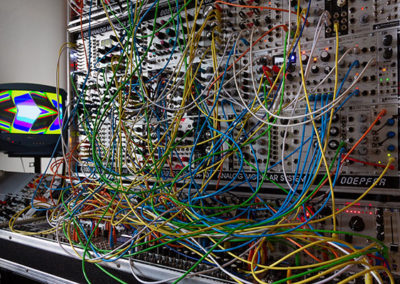 The music changed profoundly when a visitor stepped into the field of view of the camera. By moving around, he/she influenced the music in other more subtle ways. On rare occasions, a mysterious blue kitten could be seen and heard!

One form of superposition is the stacking of waveforms from the same oscillator source and having them interact in all sorts of sonically or visually interesting ways. Another is the use of many sample and hold circuits, where random and ‘undetermined’ voltages are running wild, until an action of the user ‘collapses’ them down to discrete values that shape the visual and sonic outcome. It’s a little like the concept of Schrödinger’s Cat, where one can only know if the cat inside the box is alive or dead when the box is opened. In fact, the blue kitten appearing at random moments of visitor interaction takes this analogy quite literally!

A metaphor for entanglement in audio and video synthesis is cross-modulation. This is the state of mutual dependence in which two waveform generators modulate each other. Many such relationships were patched inside SEISMIC, both within the audio, video, and modulation frequency domains, and also between them.

Gogbot is a legendary yearly visual arts festival in Enschede that is unique for The Netherlands. It attracts artists, musicians and visitors from all over Europe. Despite its grungy underground vibe, it is not hidden away from the general public. On the contrary, the main festival area is always located at one of the busiest public places in town. Due to corona, admission to the indoor exhibitions was restricted by a ticket and a time slot reservation, but this did not prevent hundreds of people from finding their way into this dazzling futuristic playground.

Talk nerdy to me!

So how does the camera detection work? First, the CCTV camera’s analog output is converted into voltages in the format of the video synthesizer by the LZX Cadet III module. The monochrome output image is fed to a keyer module. This keyer will only output a voltage if the brightness of the image exceeds a threshold set by the module. A voltage greater than 0 volts will then trigger certain events in the synthesizer system.

A secondary keyer responds only when enough brightness appears in a very small (secret) portion of the frame. This is achieved by first passing the camera image through a video multiplier (VCA) being modulated by a small bright region of video signal.

Interested in working with The Voltage Painter, or just wanting to talk nerdy? Get in touch!