Gijs van Ouwerkerk (1976) from Enschede, The Netherlands, is a jack of many trades. After completing a PhD in mechanical engineering, he has been working as a professional photographer for over 10 years. As a new spin on this ‘painting with light’ endeavor, he got hooked on modular video synthesis in September 2019, after following a workshop by Reverselandfill at Dutch Modular Fest in The Hague.

Of course, his presence at that festival was no accident, as he had been exploring modular synthesizers for music for some time. Since adulthood he has been involved in many musical projects, as a composer and multi-instrumentalist. The musical styles ranged from death metal (Solarisis) to synthpop (Heliophile), and his latest project Acheface lies somewhere between those extremes.

Working with the modular video synthesizer involves technical knowledge (and DIY skills), interaction with music, and a keen eye for visual esthetics. So it seems that with The Voltage Painter everything is coming full-circle for Gijs. 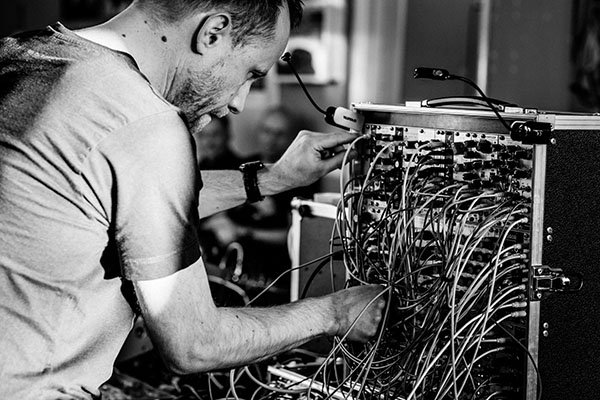 Interested in working with The Voltage Painter, or just wanting to talk nerdy? Get in touch!